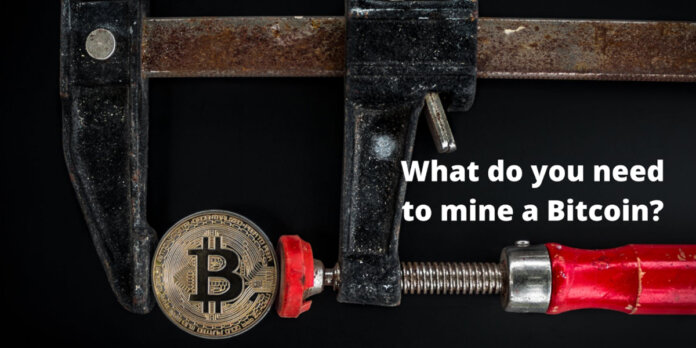 Bitcoin mining is the process of creating new bitcoins by solving a computational puzzle with computational power. Solving the mathematical algorithm is necessary to confirm a block (of transactions) which is how you are then rewarded with newly created bitcoin.

It is just like solving complex puzzles. Constant mining of Bitcoin is essential to maintain the blockchain ledger which records transactions of blockchain. It basically acts as a wallet to the Bitcoin or any cryptocurrencies you collect. With the increasing demand for Bitcoins in the modern era, the demand for higher efficient mining computer operations has also increased.

Mining Bitcoin is the process that produces a Bitcoin or token. It processes functions with computer software along with an enhanced configuration of the computer.

Mining cryptocurrencies is basically a race of people competing non-stop. Trading crypto comes with factors like buying the best, latest, and one of the most powerful hardware. This is just to maximize the return and increase the feasibility. Whether it is Bitcoin or any other crypto coin, the better the hardware. the higher the overall computational efficiency.

Pool mining forms when many miners come together. If you are not operating a mining farm with dozens if not hundreds of computing machines, but only have one or two, you would be better off joining a mining pool so that you can earn a more predictable return (your earnings are in proportion to the percentage of computing power your equipment is adding to the overall pool.)

Because bitcoin has so much overall computing (hashing) power, you are literally trying to earn money competing against millionaires who are spending as much to mine bitcoin. Also, the equipment you would need to earn a decent return on your costs would be upwards of USD $1000+ each.

How Does Bitcoin Mining Work?

Whenever you create a block, you get a block reward of 12.5 Bitcoins. The bitcoin is also mined through solving mathematical problems. These problems are called hash puzzles. To mine a bitcoin, either you need a GPU (graphics processing units) or an ASIC (application-specific integrated circuit) to process the mining process. And in case, any bitcoin user uses the same bitcoin twice, its called “Double Spending” which is ethically wrong to do.

The tradition of storing Bitcoins has evolved largely since the time it first came into existence. There are two ways to store bitcoins.

Cold storage is a system where you store the bitcoin address offline or without the need of the internet.

This method is referred to be the safest among all as it is virtually impossible to hack and can be stolen only physically.

Hot storage is a system where the wallets will require access to the internet to run.

Hot storage is used widely all over the globe as it’s proven to be the slickest method. But it has got its loopholes too like security vulnerability, network issues, viruses.

Humanity always finds a way to upgrade the way things perform. Similarly, Cloud mining is a similar example of that upgrade. In cloud mining, the need to install hardware or any mining-related software is directly eliminated. The cloud is rented by the miner which uses computing power and cuts down hassle through the entire traditional process.

Cloud mining is extensively suggested by many in the industry. There are companies with huge mining farms and you can rent computing power from them. This is wise as like others said mining on your own equipment is not profitable anymore compared to cloud mining.

Cloud miners typically use the computer of a company that owns a bitcoin mining hardware and runs it on a large scale. You pay the company rent for some part of the hardware. Based on the amount of hash power you pay for, you will earn a share of payments from the cloud mining company for any revenue generated by the hash power you purchased. Most cloud mining companies make more profits from renting out hardware or mining on behalf of an individual.

For avid traders, mining is the best and easiest way to earn bitcoins. It is easy and interesting because anyone can do it at home or anywhere you like.

However, Bitcoin mining is not free. You have to be sophisticated well enough to reap more than you sow. For hasty miners, crypto-mining is increasingly less profitable and brings more expenses and inconvenience than digital money because of its excessive electricity consumption and excessive cost to mine.

The risk involved in Cloud Mining

Many do not find risking money and energy on mining as a friendly scenario. They save up their money and buy Bitcoin when they hit their lowest.

It’s very difficult to know which websites for cloud mining are legit or not and who knows they could shut down their website. We would suggest you buy bitcoin, or any other crypto you are interested in, through an exchange or bitcoin selling websites like Coinbase, Paxful or Localbitcoins, and keep them safe in your wallet till their prices go up. And if you really want to mine, you can find a miner to do it for you after extensive research.

What about mined Bitcoins?

Growth of Bitcoins cannot be stopped. As long as people have transactions, Bitcoin will continue to grow. When a large number of bitcoins will be mined, it will impact the market by cutting bitcoin’s value to halve every four years. However, it will take a century or more for such a day to occur. So you can now mine bitcoin without worrying about its future value.