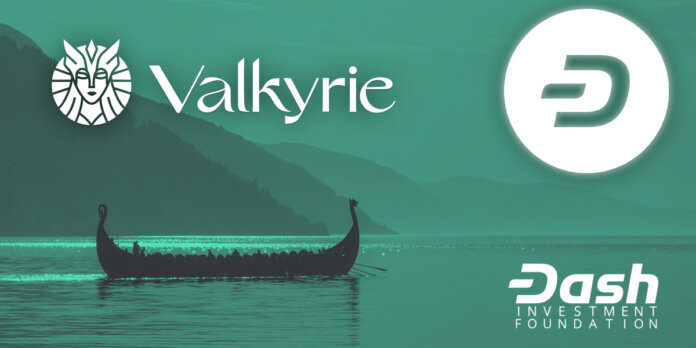 The Trust is the first investment vehicle at Valkyrie to invest solely in Dash, the digital asset that powers the Dash Network. The primary investment objective of the Trust is to reflect the value of Dash held within, to offer investors access and exposure to the cryptocurrency in an insurable, cost-effective manner. BitGo is listed as the custodian for the Valkyrie Bitcoin Trust that will provide institutional grade quality and security. The Valkyrie Dash Trust SEC Registration filing can be found here.

The Dash Investment Foundation (DIF) invested in Valkyrie Investments during their initial seed round in December 2020 signing a SAFE agreement. Valkyrie has since then recently completed a Series A funding round raising $10 million which included an interesting roster of backers such as Tron founder Justin Sun, Litecoin founder Charlie Lee and former Major League pitcher C.J. Wilson. The DIF is the world’s first ownerless and memberless investment fund and is completely controlled by Dash’s decentralized Masternode Network.

Who Are The People Behind Valkyrie?

Valkyrie’s team is comprised of industry-leading investment professionals with a wealth of financial knowledge and investment management expertise who have previously launched multiple ETFs, publicly traded funds, and ETPs, including Bitcoin funds with backgrounds across Guggenheim Partners, UBS, Chicago Board of Trade, Chicago Mercantile Exchange, and The World Bank.

Valkyrie CEO, Leah Wald began her career working at the World Bank. Leah recently served as the VP of Portfolio Management at Exponential. Previously she served as a Partner at Lucid Investments, an asset management firm where she launched their Bitcoin investment arm. Leah has developed investment strategies for two of the world’s top-performing multi-billion dollar asset managers.

Valkyrie CIO, Steven McClurg is a former Managing Director at Galaxy Digital and has a long history in investment and portfolio management. Steven was previously the Founder and CEO of Theseus Capital that was founded in 2018 and was later acquired by Galaxy Digital.

How Will The Valkyrie Dash Trust And DIF Investment Help Dash?

The Valkyrie Dash Trust will provide several benefits including:

Ryan Taylor, CEO of Dash Core Group provided more insight as to why is it so important for institutional investors to have access to Dash:

“Institutional investors can help expand access to new jurisdictions and investors. For example, with a stock exchange listing through a Dash trust, it will be much easier for the public to hold Dash exposure in tax-advantaged accounts like retirement accounts, or gain access in jurisdictions like New York state. Institutions also have unique needs for services like custody that Valkyrie provides as part of the trust. This solves many issues surrounding asset security and controls that might otherwise prevent institutions from investing.”

Is Dash Actually Being Used As “Digital Cash” For Payments?

The Valkyrie Dash Trust launch comes only one week after the launch of DashDirect, a groundbreaking instant-savings retail app that allows users to pay with Dash and obtain exclusive discounts up to 12% on everyday purchases at over 155,000 national chain retailers and 125 online stores in the U.S. featuring retailers such as Best Buy, DoorDash, Instacart, CVS, Lowe’s, Staples, The Home Depot, Autozone, GameStop, Chili’s, Ulta, Chipotle, Subway, American Eagle, and more.

“The DashDirect retail-saving app developed by CrayPay has transformed and revolutionized how I fulfill my everyday shopping needs within the United States. DashDirect provides unrivaled utility with the ability to perform payments with the cryptocurrency Dash coupled with significant discounts at the largest retailers in America. Paying for goods and services with Dash has never been so easy with increased accessibility to both in-store and online merchants. The DashDirect app is a game-changer for the crypto payments industry as it allows me to spend Dash at nearly seven times more merchant locations than Bitcoin’s global reported total.”

Dash is gaining incredible traction in the market for real-world use and adoption. In fact, Dash has experienced its 20th straight quarter of adoption growth. Dash as a decentralized network open source project is very much focused on expanding adoption and mainstream use. Dash’s development roadmap highlights the upcoming launch of DashPay, a wallet with a username-based payments experience to which mainstream consumers are already accustomed, in addition to enabling anyone to create their own decentralized applications with Dash Platform. These significant improvements in user experience will likely accelerate Dash’s user growth rate further.