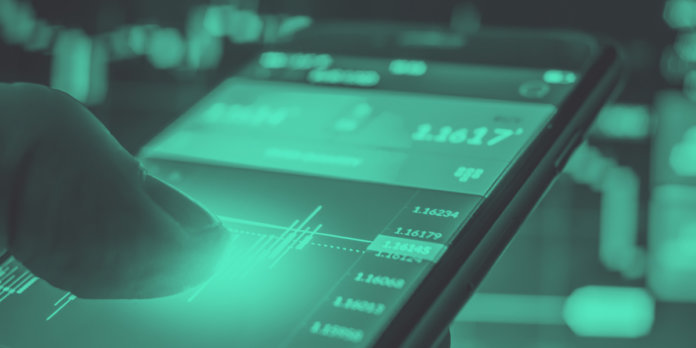 Trading Bitcoin and other crypto assets off the network has never been as fast as it is today. Within the traditional financial sector, a willingness to sell a currency swiftly is seen as a bad sign for its stability. Whether this concept can be applied 1:1 to the crypto-market, however, will require detailed investigation.

One of the most common ways to estimate the price of a cryptocurrency is with the “equation of exchange”. This model comes from the 20th century economist Irving Fisher. One of the main insights of this model is that the more often a currency changes hands, the less value the currency has. Money changes hands more frequently when people believe the money will lose value. For example, if there is high inflation, people will hold on to the money for the shortest amount of time possible before tossing the hot potato to someone else.

For the past few years, Bitcoin’s off-chain velocity has been increasing. But what does this mean? Vitalik Buterin famously applied this model to crypto assets in 2017 in order to argue that coins need velocity sinks that encourage hoarding. Partner of Multicoin Capital, Kyle Samani, wrote an article in agreement with Vitalk’s understanding of velocity. He wrote,

However, Scott Locklin, an engineer for Brave Attention Token explains in a recent papr that both Buterin and Samani are wrong. This article models Bitcoin’s price with the equation of exchange model and discusses why the relationship may not be as straight-forward as Buterin and Samani surmised.

Introduction to the Equation of Model

Each distributed ledger network offers a specific range of abilities to their cryptocurrency users. The fundamental value of a coin can be defined as the aggregate summation of each individual user’s valuation of the network. The short-term prices of cryptocurrencies are determined by supply and demand and may not reflect their fundamental values. However, price can be a noisy signal of a cryptocurrency’s fundamental value over the long-term. Long-term refers to multiple periods of macroeconomic cycles including expansions and recessions, which the cryptocurrency market has still not completed.

Several papers have used the equation of exchange model to estimate Bitcoin’s price in 5 years, 10 years, and even on longer time horizons. For example, Kraken and the Economist estimate Bitcoin’s price to be $1.91 million by 20221, Satis estimate $96,000 by 20232, and Vision & $65,000 by 2028.3 The main reason each report has different prices is that estimating future demand for Bitcoin and other coins is based on assumptions. The equation of exchange model is an absolute approach to valuing crypto assets. This means that the model gives a target price that crypto assets should be priced at based on assumptions regarding changes in supply and demand.

The equation of exchange model relies on the theory that the value of each cryptocurrency should be directly correlated with the dollar volume of the economy it supports. A cryptoasset economy that has $1,000 in trading volume each year and has 10 coins in circulation will have a fair coin value of $100 if each coin is traded once during that year. The value of each cryptoasset is inversely related to its supply, i. e. the number of coins that are in circulation and its velocity, i. e. the number of times each coin is traded per year. The growth in GDP of each coin or the cryptoasset economy will be determined by product-market fit. The likelihood of future market adoption is what drives speculative today.

The absolute valuation approach is inspired by Mill’s equation of exchange later formulated by Irving Fisher.4 In this model, the percentage of the total addressable market (TAM) can be used to estimate a cryptoasset’s implied future price. The traditional equation, MV = PQ, was first applied to Bitcoin by Chris Burniske in his original 2016 report for Coinbase.5 The equation of exchange, MV = PQ describes the balance between money in the economy and demand for that money for purchases of goods and services. To estimate the size of the economy supported by cryptoassets, the following steps are taken:

The economic size of all relevant use cases for a crypto asset are summed. This is referred to as the target addressable market (TAM). This involves three assumptions:

An estimate of the percentage of each target addressable market that is penetrated by cryptoassets over a ten-year horizon is calculated. This involves two assumptions:

Each annual addressable market is divided by each coin’s velocity to determine the coin’s market capitalization. This involves three assumptions:

To determine the price per coin, the total addressable market multiplied by the penetration rate is divided by its circulating supply.

Once the price per coin is forecasted for each year over the next decade, the discount rate must be applied in order to calculate the net present value of the price of each coin for each year. This involves the following assumption:

We now have to fill these general assumptions with details and numbers so that they can be applied to the current situation. Are the numbers supporting Locklin’s statement or were Buterin and Samani correct after all? Is a high off-chain speed getting in the way of stabilization or not? The follow-up will be released in the coming week.

3 Dr. Lidia Bolla and Christian Schüpbach, The Blockchain Story. What’s it all worth? Vision&, May 2018. Retrieved from https://www.visionand.ch/wp-content/uploads/2018/06/vision_Valuation.pdf