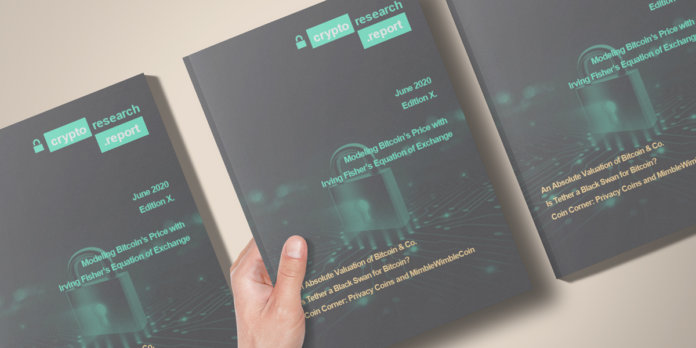 On June 23th, the newest edition of the quarterly “Crypto Research Report” was published. Endorsed by Bitpanda and Coinfinity, the tenth report includes an in-depth analysis of Irving Fisher’s Equation of Exchange model, Tether’s risk to Bitcoin’s price, and an Exclusive interview with the team behind MimbleWimbleCoin. Since the last edition of the Crypto Research Report published on February 10th, Gold is up 10.6% and Bitcoin is down 5.91%.

The Crypto Research Report can be downloaded from the following links:

In three chapters and more than 60 pages, the authors provide a critical and academic perspective on the legal, technical, and economic aspects of cryptoassets. Key topics covered in the report:

• Modeling Bitcoin’s Price with the Equation of Exchange. The target addressable market for crypto assets is approximately $212 trillion. The largest use cases include medium of exchange, which includes all global fiat currencies worth $126 trillion, and consumer loans with a global value of $42 trillion. If Bitcoin penetrated 10% of this market over the next ten years, each Bitcoin would be worth $397,000 by the end of 2030.
• Is Tether a Catastrophic Risk for Bitcoin? This guest article by Schlossberg&Co’s Pascal Hügli investigates if Tether is really being used to manipulate the price of Bitcoin or not. Since the beginning of this year, $5 billion worth of Tether USDT has been issued. If the new Tether is not fully backed, and if Tether eventually collapses, this will most likely bring down at least one exchange and wreak havoc on the price of Bitcoin.
• Exclusive Interview with the Team behind MimbleWimbleCoin. MimbleWimbleCoin is a new privacy-based coin that was airdropped to Bitcoin holders for free in December. Since December, the price has soared 6000%, and the authors argue that their token economics are superior to the privacy coin Grin, and that they are more scalable than Monero.

For the first time in Bitcoin’s young life, the global economy briefly plunged into recession. Covid-19 resulted in 40 million Americans unemployed representing an unemployment rate of 15%. In Austria, there are 571,477 unemployed (12%). In Germany, 2.639 million (5.8%).

Despite having an entire quarter’s GDP erased from 2020, hedge fund managers are all singing the slogan, “All Time High by the Fourth of July”. What this slogan means is that the S&P 500 is expected to hit a new all-time high by July. Although, this sounds unbelievable, central banks around the world have the power to make this happen, and so far, they seem to be doing everything they can to weaken their currencies and artificially prop up asset prices.

Despite unprecedented quantitative easing, trillions of short-term credits to the repurchase agreement market, and lowering interest rates to zero, the US dollar index (DXY) barely moved. This means that the dollar can take a lot more abuse from the printing machines before it starts to devalue against other fiat currencies. Also, the 5-year forward inflation expectation for the US dollar is sitting at a low 1.43%.

Traditional markets are no longer reflecting the state of the economy. Instead, they are reflecting the central bank’s effort to keep the pension system alive and to get Trump reelected. Unfortunately, there is no turning back now. Every hiccup in the economy needs to be met with even greater inflation, leading to an even wider gap between reality and finance.

And where was Bitcoin during all of this? From $3,600 in March to $10,000 in May and then back down again to $9K, the ride on the Bitcoin rollercoaster has made some nauseous and some rich. Many cryptocurrency companies are in dire shape due to the shut-down and lack of customers, but Bitcoin hodlers just keep holding on in hopes of a post-halvening bull market. So far, the halvening has been a non-event. Bitcoiners around the world joined in on Zoom webinars to celebrate Bitcoin’s special day, but the Bitcoin price hardly budged. The uncertainty surrounding the economy has definitely put a damper on the crypto market. However, there is still hope yet. As governments around the world wage currency wars to protect their export markets and inflate away their burdensome debt, some households may turn to Plan B.

We are happy to announce that the Crypto Research Report has struck a strategic partnership with CoinTelegraph, the largest crypto news company in the world. The September edition of the Crypto Research Report will be distributed by CoinTelegraph on their website, which gets 6 million views a month. The goal of the joint effort is to publish the results of a landmark study on institutional demand for crypto assets in the German-speaking countries. This study is being conducted by Professor Dr. Philipp Sandner from the Frankfurt School of Finance and Management, Professor Dr. Alfred Taudes from the Vienna University of Economics and Business (WU), and the editor of the Crypto Research Report, Demelza Hays.

This edition of the Crypto Research Report is especially thankful to the Crypto Research Report’s Premium Partners, Coinfinity in Graz and Bitpanda Pro. Coinfinity is a broker in Austria that is famous for creating an easy to use Bitcoin cold wallet called The Card Wallet. Coinfinity also enabled Bitcoin purchases at 4.000 retail outlets across Austria via the Bitcoinbon program. In addition to Coinfinity, we are exuberant that Bitpanda has joined as a Premium Partner of the Crypto Research Report! Bitpanda is a fully licensed exchange based in Austria. They have recently added Bitpanda Pro, which offers more liquidity and lower fees. We are personally excited about Bitpanda Metals, which allows investors to diversify their portfolio with physically backed and 100% insured precious metals.